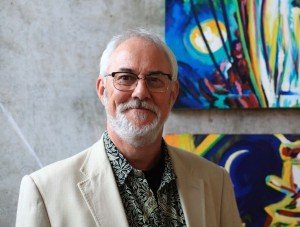 Richard Sharland is an artist, environmentalist, writer and gallery owner who lives in Altarnun, north Cornwall. He shares a home with his partner, the writer Cathy Galvin, that also accommodates his art gallery, Terre Verte .

Richard’s artworks are mostly in watercolour, acrylics and collage and occasionally with found objects. Largely landscape based and abstract, his paintings have become concerned with the way fragmented memory and perception coheres around our experiences of place, issues and emotion. His images, ideas, materials and often paintings themselves are frequently recycled and re-used, fragmented and reconfigured. Engaging these processes reflects cycles of activity in the natural world, the way we often process experience as memory, and visually represents evolution and continuity in his practice.

When he moved to Cornwall in 2014, Richard set up Terre Verte Gallery in Altarnun. Running Terre Verte is also an artwork, the curation of exhibitions and literary events steered creatively to present other artists’ work as collective experiences – it is a gallery, not just a ‘shop that sells art’ – it is a hub for artists and writers and the local environmental group. You can find out more about Terre Verte online here :

Born in London in 1952 with family roots in Devon and north Cornwall, he grew up in various places in England, Malaysia and Germany. He was first inspired to paint by west country watercolourist William Lyons-Wilson and, stimulated by the ideas and cultural changes of the 1960s, he abandoned university in 1972 and set out to make a life painting and ‘living in the woods’. This journey ‘back to nature’ led to a long excursion deep in the wilds of northern British Columbia and three years living in rural Northumberland, developing his work and holding exhibitions including one memorable one with Li Yuan Chia at his LYC Museum.

In 1978, he began working as a community artist and campaigner, firstly in Durham, then in Leamington Spa and Derby, before joining the environmental sector. During ten years as Director of the Lancashire Wildlife Trust, issues involving the growing threats of climate change and species extinction became central to his life. This preoccupation informed the next 15 years in regional and national Director roles in the Groundwork movement and a further 4 years with Manchester City Council creating and co-ordinating long term strategies for the city to tackle climate change and the environmental challenges of the future.

In addition to his own artwork, creative projects and collaborations have proliferated during his career. From being part of the team that created Durham’s geodesic-themed free music festival Durham Domefest (1973 )to leading Derby Community Arts’ Raku City, Lockout Mural and Poets-in-the-Pub (1983-85); from commissioning Raku Works installation at Cuerden Valley Park (1990) to participating in Lancashire’s first Green Plan (1991) and working with The Harrisons on their contribution to Arts Transpennine (1995).

Following the death of his wife Jan in 2011, Richard retired his environmental career in 2013 and moved back to the landscape of his ancestors in the south west.  In the words of the poet Gary Snyder, he “found his place on the planet and began digging in” at Altarnun in 2014.  Returning to creativity full-time, he has redeveloped his painting practice, begun to publish poetry and established Terre Verte as a solar-powered gallery with a track record of 30 exhibitions, hosting over 150 artists and writers. He continues to work for a low carbon future by co-ordinating and supporting local environmental action in his community.